We fail, we all do, and we fail often. Failure will be amongst us until our last breath of air, sometimes on a daily basis. So what we need to understand is what failure is to us, and what we take from it. Every so often do we find ourselves failing at something and because of that failure more follows. We create a chain reaction of failures and it spirals us down and seems

So think about the last time you failed at something. What happened? What did you do after? Did you beat yourself up over it, did you shut down the world and become sad inside, did you get angry and upset, and did you create fibs and change the story trying to hide it from those we know? Maybe it is all of this. So what this blog aims to do is direct your behavior when you fail to take in the positive aspects and turn it into a good thing. With three simple steps we will all overcome this problem of failure and make it beneficial to our lives so that we never again will worry about failing.

So the first step to overcoming failure is to understand we did fail and accept it. We need to know that we did not have success at something and understand that it happened and is over. Picture it this way, if we failed a test, we cannot redo it, re-open the file, or go back in time and change our answers. If we failed to win a

soccer game, we can’t alter the score, we can’t make that pass to our teammate we wanted to, and we can’t change the kick that almost made the goal. It is over, and now we must realize that.

When something happens in life we cannot change it. As much as we wish there were time machines to go back in the past there aren’t. To successfully complete step one you need to understand the failure happened, know that it cannot be changed, stop all impact it has on your life, and move on to step two.

Step two for overcoming failure is to understand what you learned from it. What you LEARNED. What we tend to do is not even notice that we have learned, but instead whip out the punching bag and start beating ourselves up. We sometimes break ourselves so hard that we create depression. Nevertheless we need to understand that failure is teaching us something. It is

teaching us everything about what just happened and why it happened. It allows us a firsthand experience to learn and take in what is required from us to not let it happen again. We gain knowledge that will direct us in the future to progress and become better, grow, and become smarter. If we failed the test from lack of studying, we learned to study more. If we failed to win the game, we learned to practice harder or that we were in over our heads, or maybe we should just play foosball.

A great example of learning from failure is from Walt Disney. In his vision to create a dream that would impact us all he kept going from bank to bank trying to get a loan and failed. He failed time after time over three hundred times. So what did he do? Give up? No way. He learned. He learned from his failures, changed his approach, and made it happen. Now look at his company; the place we all want to go regardless of age to smile and never stop.

Now that we understand how we failed and what we learned from it we are ready for step three. Step three is understanding the need to move forward and utilize what you learned. You utilize what you learned to benefit the future. We create new ways, new ideas, and new thoughts. We become better than we once were each and every time. Imagine if every time we have ever failed we grew from it and became that much smarter… we all would be geniuses in our life examples book.

So let’s become geniuses. Let’s fail and learn. Let’s exercise our right to stay positive and become that much better of a person. Let’s teach others how to deal with failure and not hesitate to fail because we know we got this. Now get out there, handle failure the way you should and live life the way you want to. You got this. 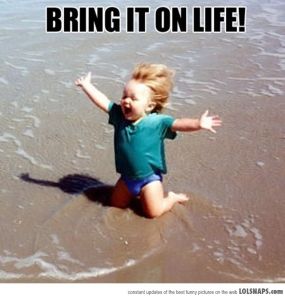 Hey this is Chad Grayot! Follow along and I will provide great insight on how to live the best life.